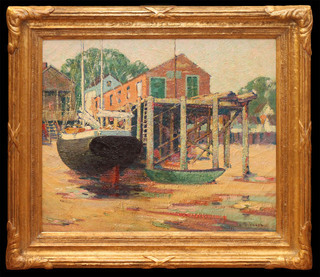 This Coats painting was featured in our weekly email on 12/19/13 along with the following gallery comments:

This Randolph Coats painting comes to us with interesting records. Two tags are affixed verso while the artist-provided title, Rum Runner, is written on the canvas itself.

The first exhibit tag is from the 33rd Annual Oil Paintings and Sculpture Exhibition at the Art Institute of Chicago in 1920 on which the painting is titled Portuguese Villa, Cape Cod. The tag also notes the painting being on loan from the Art Academy of Cincinnati.

The second tag is a record from the 17th annual Artist’s Exhibition at the John Herron Art Institute (Indianapolis) held in 1924. The painting is titled Retired Rum Runner on the Herron tag.

After some searching, I stumbled upon a story of an infamous Provincetown character named Manuel Zora. “Captain Manny” was a Portuguese fisherman from Cape Cod and revered as one of the best rum runners during Prohibition. His incredible ability to captain his vessel The Mary Ellen in high seas to avoid capture earned him the moniker “Sea Fox”.

Beyond the business of rum running, Provincetown was a successful art colony where nearly 300 artists and six schools of art existed by 1916. The more colorful title Retired Rum Runner (from the Herron exhibit) was given to the painting as Prohibition was in place. Did Coats paint Captain Manny’s boat? We don’t know! One of the great joys of working with historic art is uncovering the stories that surround these pieces as we dust them off.