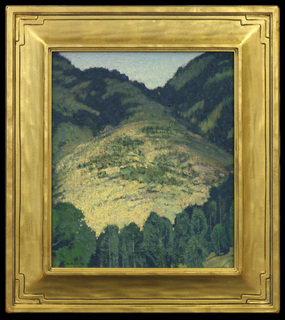 Oil on Canvas
14 x 12 inches
Signed Lower Left
SOLD
—
This painting was featured in our weekly email on 8/19/16 along with the following gallery comments:

Carl Woolsey was raised in Danville, IL and moved with his family to Indianapolis in 1921. The next year had him in Long Beach, CA but he returned to Indianapolis in 1925. He had become intrigued with Taos after seeing an exhibition of works by Walter Ufer. That began a period of correspondence with Ufter which resulted in Carl relocating to Taos in 1927. Ufer informally mentored Woolsey and his Taos works sold very well. Today’s painting, Sunlit Hill emanated from the Taos period. It highlights Woolsey’s detail work and his ability to convey difficult subject matter. Carl’s brother Jean was a frame maker and in Taos during Carl’s time there. And Sunlit Hill is housed in a Jean Woolsey frame. The painting is in flawless condition and was recently cleaned and revarnished. The frame is in very good condition and recently underwent a light cleaning. A very nice work by a national artist who found a great following in Indiana.
SOLD