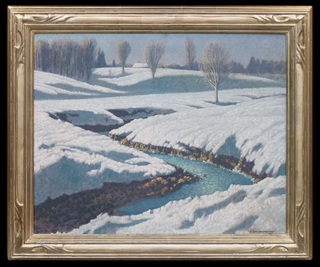 This work was featured in our 2nd Annual Curated Sale of Historic Indiana Art, April 8th, 2018 at the Indianapolis Art Center.

-
This painting was featured in our weekly email on 10/6/17 along with the following gallery comments:

This is a bit of a yarn…

By way of quick background, Carl Woolsey spent many of his painting years in Martinsville, IN. However, from 1927-1934 he relocated to Taos, NM. Very impressed by the work of Walter Ufer, he studied and painted with Ufer and generated some spectacular pieces which met critical and commercial success. In addition to Ufer, Victor Higgens, Ernst Hennings and several others were part of the Taos scene at that time. By 1934 with the depression in full bore, Woolsey came to struggle with sales and returned to Martinsville.

Carl’s brother Jean Woolsey was a frame maker and went to Taos with Carl, establishing a framing business. His original hand-carved frames are often mated with Carl’s paintings.

I’ve owned property in Brown County (near Helmsburg) for about 18 years. I drive down there like 20-30 times a year. I play golf. I drive by the Martinsville Golf Club every time I go down.

Despite looking at it through the car glass a thousand times, I hadn’t played the Martinsville Golf Club
until a couple years ago. On that occasion I made a point of meeting Mr. Carmichael, who’s owned the course since the late 1960s and has lived on the property his entire life. Having heard Woolsey lived on the course property, I wanted to hear what Mr. Carmichael knew

He told me Carl Woolsey lived in a house about where the fifth green is currently located. He also said that the club used to own five or six of Woolsey’s paintings. I surmised that some were probably given in-kind, for the lodging.

Today’s piece, Wintry Brook (artist’s title) came to us from Bow, New Hampshire where it was discovered on the fourth floor of an apartment building that was being renovated. Unloved, it was almost overlooked and thrown out!

After it arrived we began conservation and work on the frame. In the meantime, I had an image on my phone and on a recent trip to Brown County, stopped by the Martinsville Golf Club again to speak with Mr. Carmichael. Working like he does every day of golf season at 81 years old, I tracked him down watering the 17th green. I showed him the image on the phone and asked, ‘With this brook, so similar to the beautiful brook that runs through the Club property and knowing Woolsey was on the property – could the setting of Wintry Brook be right here?’. His answer…: ‘Maybe’. He speculated the distant building could be the Carrol’s barn and kicked it around some more. But ultimately, we left it at ‘maybe.’

Carol Woolsey’s Taos paintings often depict brilliant, almost alien-looking winterscapes. I love that he takes a very similar look to Wintry Brook — a rare painting featuring Martinsville subject matter. The hand-carved, original frame was almost surely created by brother Jean Woolsey. It’s beautiful in and of itself. In restoration of the frame, we applied a blue clay layer underneath 12K white gold leaf and top-finished that to a slightly warmer tone. The package, together, is a rare and stunning example of both Jean and Carl Woolseys’ work.
SOLD